How should we handle offensive images in questions, or obvious soapboxing?

-After years and years and changes in minds and behaviors by education and communication, it seems terribly ugly and unbelievable - This statement doesn't appear to have any bearing on the question, and could only be used to influence and prejudge the answers.

Reports from Houston about signs in front of a parking lot have some people upset.

The Westview Shopping Center is across the street from the El Farouq Mosque in a Houston neighborhood. Some worshippers have been known to park in the shopping center's lot while attending services at the mosque, but it seems like the shopping center could've handled the situation a little more delicately. Several "No Muslim Parking" signs were posted on Westview's property, leaving worshippers feeling unnerved and upset.

-Attempts to generalize the question were removed - Removing the picture, and inserting a generalized question so as not to offend a particular group were ignored, (I.e. "Are [NO ' signs legal in public in the USA?")

-Even including all the OPs original question, but hiding the offensive image in a spoiler block were rejected.

This appear to me to be soapboxing. The OP hasn't provided justification for why the proposed edits diminish their question in any way.

It would be as if a user asked if protesting at dead soldiers funerals were legal in the USA, and insisting that we are inflicted with the super offensive image below 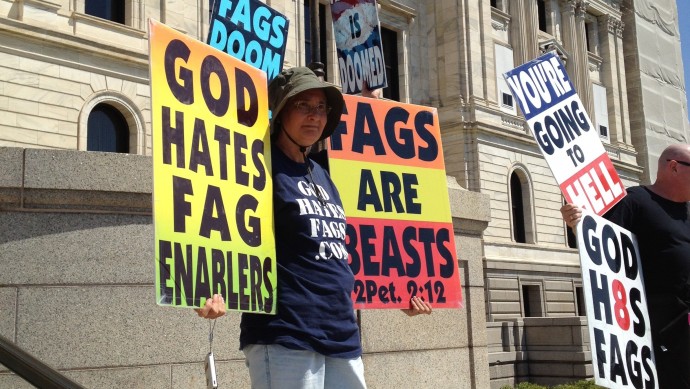 I think attempts to edit the image out are being overly sensitive, the image is no more offensive than listing the text of the sign or a generalization of what it says, unless you find clip art or poorly made signs something terrible. The rest of the text in the question is drivel that should be cleaned up. The actual question at the end and the sentence explaining where the picture is from are the only useful bits of text in the question.

Attempts to generalize the question were removed - Removing the picture, and inserting a generalized question so as not to offend a particular group were ignored, (I.e. "Are [NO ' signs legal in public in the USA?")

In my opinion, such attemts should be removed, because they make unclear, what's the actual issue here. You generalize the question to the place where noone knows what is really about. It could be, actually, a convenient way to sweep the issue under the carpet, which should not be accepted here.

The picture is documenting a part of our reality, and should be handled a such.

Not the answer you're looking for? Browse other questions tagged discussion flagging .

7
How should lower-rep users handle 'answers' that don't address the question?
2
How to handle a post with multiple issues
5
Should we allow link-only questions?
7
Is asking about the legality of the MoU signed between California and China on topic?
8
Editing a question to such an extent as to make all existing answers off-topic
23
How do I prove my question is asked in good faith?
9
2020 Moderator Candidate Questionnaire