I was appalled by the comments and close votes given to the question What is the seating capacity of the U. S. House of Representatives gallery?? (Not my question.)

There is a concept called cooperative communication. It means discerning from what is asked what someone really means to be asking and responding accordingly, rather than quarreling with the precise language used in a question that is perfectly clear in feigned ignorance.

In particular, this room: 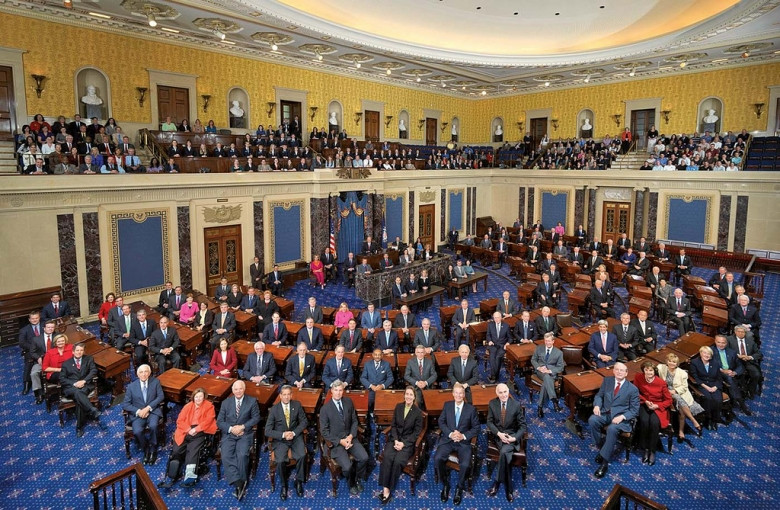 If somebody thinks that this is a question for an architecture forum rather than a politics forum, so be it. But, it is rude to the point of being troll worthy to vote to close a question like that on the grounds that it is unclear what is being asked simply because you want to pretend that you don't understand the intent of the question. Anyone who is that thick does not belong on this forum.

I closed the question using the reason, unclear what you're asking:

Please clarify your specific problem or add additional details to highlight exactly what you need. As it's currently written, it’s hard to tell exactly what you're asking. See the How to Ask page for help clarifying this question.

As your question is phrased in this way ...

... it's unclear if you're trying to ask about the United States Capitol Building (home to the US Congress) or state Capitol buildings (e.g. Iowa State Capitol, Michigan State Capitol). State of the State addresses are given by Governors of the particular state in the State Capitol, not in the one in D.C. you mentioned.

As you clarified in this Meta post, now it's clear enough to be answered:

So, it is unclear since you referred to both Congress of the United States and the State of the State address (which is given the address given by Governors).

That being said, questions get put on hold all the time, that's why it's not closed instantly (but put on hold first):

What does it mean for a question to be on hold?

If a question has been closed (except as a duplicate), then for the first 5 days, it is marked as “on hold” rather than “closed”. This is meant to convey that the question requires improvement and may be reopened if improved. During this period, if the question is edited by the asker (now by anyone), it will be added to the reopen queue. Other than this, there is no functional difference between “on hold” and “closed”.

Source: What is a "closed" or “on hold” question?

So, while it is on hold, just edit the question to resolve the outstanding issues and the question will be back open in no time.

That may be what the asker wanted to know. But the question didn't ask that. It said

Why are you so convinced that the person wasn't using the right words? Maybe that person really wanted to know the seating capacity of the gallery of some state senate where the governor gives a state of the state speech.

This isn't a trivial difference. We're talking about different buildings here. On what do you base your claim that it was the US State of the Union speech?

Personally, I think that you and agc vandalized this question. You changed it from unclear to a different question than when it started. Because you read the question a particular way. I'll admit that it's a plausible interpretation. It's probably the single most likely interpretation. But that's only because the State of the Union speech is much bigger than the State of the State speeches.

It would have been far better for the original poster to have clarified what the question intended than for people to guess. That's the way that the system is supposed to work.

SE Politics uses Q&A mechanisms developed by & for computer programmers which are currently not as well-calibrated for the needs of people interested in politics.

Most political Qs are not immediately testable, and answers are more speculative and dependent on some irreproducible set of the answerer's political premises and experiences. Reconciling and evaluating political disputes requires some minimum of disinterest, abstraction, imagination, courtesies, and some empathy. These political virtues are commonly regarded as inefficient frills by engineers.

SE Politics is like a noisier channel with obsolete protocols. If it's ever to scale up, the design would require a few improvements, whatever those might happen to be.

What's interesting, in light of the above, is that the existing SE mechanisms work for Politics at all, and where they work best. But that's another question...

As you already know, politics is not law. And using procedure to mask issue-advocacy is essentially par for the course in politics (although this methodology sips into law practice as well). The fact is that this community is very issue-minded rather than process-minded (as it purports).

A brief look at which issues get upvotes and which get censored (erased, muted by being put on hold or closed) will reveal a very clear picture that procedure is used as a cudgel here rather than as a tool to streamline communications.

But, it is rude to the point of being troll worthy to vote to close a question like that on the grounds that it is unclear what is being asked simply because you want to pretend that you don't understand the intent of the question.

I call it "willful ignorance" and I don't believe I invented the term. It's not a bug, but rather a feature of any forum which uses procedure to quash undesired lines of inquiry. And you are right. It is very common here.

Consider, for example, this question:

Why is President Trump making such a big deal about fake news, and specifically targeting reputable organizations like The New York Times and CNN?

It, clearly, suggests a premise and solicits opinions which would justify it. You can ignore, for a second, the fact that it got so many upvotes. Look at how the moderators are treating it. It was put on hold to protect it against "poor quality answers". In other words, it's open only to the site's semi-orthodoxy to prevent those who haven't been blessed by the groupthink to participate. I know I exaggerate, but it's only for the purposes of demonstration.

Now consider this question (of mine): Is “it's an active investigation” the new McCarthyism? This started out as a question about procedural similarities in the mode in which accusations were being made against a right-wing US President. And it immediately got attacked, was put on hold as something "not about politics". I kid you not. The question comparing modern political discourse to McCarthyism was voted as being not about politics. And it eventually got deleted after a few people tried to answer it (in the negative!) in the comments. I do freely admit that I did mock those who disallowed answers of the question. I edited the question and mentioned the irony of McCarthyist tactics against a question about McCarthyist tactics.

In both cases, procedure was used as the justification for question's treatment. This is nothing but issue advocacy. And (maybe) it would be ok if it were done by the participants. But, in both cases, it was blessed by the moderators. I am sure they will make claims that they have supporters of various political sides, but their inability to stay objective and their very strong tilt towards one political side makes the whole premise of this site questionable.

11
How do we deal with politically divisive news events?
4
Should we avoid answering bad questions, or does the reversal badge mean doing so is approved?
6
Is it acceptable to ask questions with obvious answers as a means of improving the community?
11
How to salvage the quality core of a question over the objections of its author?
2
How should the [social-security] and related tags be used?
2
can we have a placeholder/FAQ/feedback mechanism for questions that we know the community is going to close?
0
Edit rejected. No deviation from original intent
13
Can “What did they say” be off-topic?