Why was my profile modified?

I had a remark on my profile that "Goyim Lives Matter". This was deleted, presumably by one of the moderators.

I will preemptively refute the accusation that this is antisemetic. Oxford Dictionary defines the word "antisemitism" as "hostility to or prejudice against Jews".

My comment that "Goyim Lives Matter" did not express hostility to or prejudice against anyone. Rather, I am simply expressing my strongly held view that "goyim" (i.e., non-Jews), like all human beings, have an inalienable right to life, liberty and happiness. I do not see what is wrong with this, or why it is inappropriate.

I would kindly request that I am allowed to re-include that comment.

I was the one who flagged this users profile. I have no interest in discussing this with the user in question, but want to explain my reasoning to others who are reading this.

Why "Goyim Lives Matter" is antisemitic

When you google the phrase in question, this is the first result: 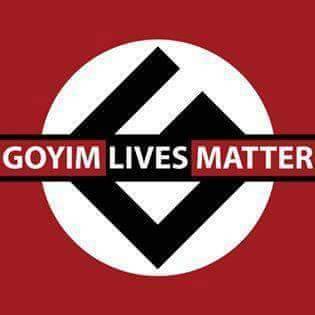 And yes, that's a modified swastika, and no, that's obviously not a coincidence.

The implication here is that someone - the Jews in this case - believes that non-Jewish lives don't matter. Otherwise, the slogan would not make sense. The idea that Jews are out to get non-Jews is classic antisemitism.

Antisemitic history of the user in question

The user in question has a long history of antisemitic outbursts and personal attacks. It should be obvious that someone with an antisemitic world view is not using the slogan "Goyim Lives Matter" - or "OpenBordersForIsrael" for that matter - neutrally. It is obviously a violation of the "no bigotry" part of the Be nice policy.

Personally, I also flagged the users profile because of their profile image - a hate symbol in some contexts - as well as "OpenBordersForIsrael" which used by people who are not antisemites might be acceptable, but where the implication is clear if used by people who have a history of antisemitism.

This user is an obvious troll, and is currently testing out the borders of what is acceptable behavior here - likely encouraged by unreasonably weak reactions in the past.

I appreciate the moderator intervention in this case and hope that moderators will stand by their decision to remove an antisemitic slogan. I also hope that they will keep a close eye on this user and take appropriate measures once the user does cross the border into unacceptable territory.

There are a couple elements to this:

The Overflow Blog
Featured on Meta

29
Do we really want to tolerate personal attacks and antisemitism here?
20
Why are people who unapologetically and repeatedly post racist drivel not banned for extended periods of time?
-8
Why was my answer deleted?