Answer improperly deleted; Neither Rude nor Spam; No way to undelete

This question was improperly deleted. It is neither rude nor is it spam. It even has a reference.

When I try to undelete it, it says

A moderator has deleted this post and it cannot be undeleted

The only phrase that I can think of that may be considered rude is from the source reference. If so, the proper action to take is to edit and change to a block quote. Otherwise, it should be undeleted.

That answer was flagged as rude/abusive by a user and I agreed, so I deleted it.

I agreed that it was rude/abusive because it reads like a conspiratorial rant which paints a vaguely-defined group of people as some sort of cartoonish villainous force.

That answer was flagged for undeletion twice, and 2 different moderators declined those flags.

I do not foresee that answer becoming undeleted.

I think this was part of a series of fake news tweets which have since been deleted from Twitter. Google still has them in their cache, the tweets can be found here.

A quick screenshot of what the tweets looked like, should it eventually be removed from cache (hover over to see the screenshot): 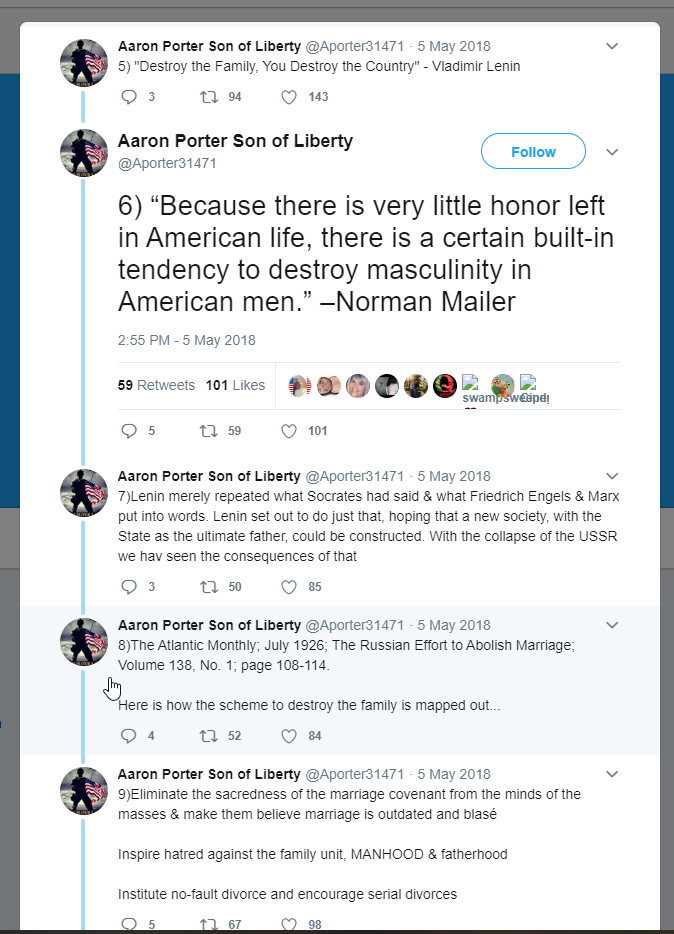 It's 2nd-hand smoke and belied by subsequent events. For example, the answer claimed that the 1926 article said, among other things that the Soviet plan was to

But in retrospect we know that the Soviet Union and even Russia today actually took/take a hard line against homosexuality. So the whole article [assuming it exists and says that] seems little more than embellished red scare with little factual basis. The deleted answer tried to present its summary of the article as factually correct regarding Russia, Marxism and what not.

And as LangLangC says, the article in question doesn't even seem to mention homosexuality.

And based on that flimsy reading of the source, the poster (Aporter) concluded that

This is ALL about indoctrinating boys & girls with the notion that there's no difference between men and women.

Clearly the poster is entitled to his political views (on Marxism and what not), but the answer was seriously flawed as far as sourcing went. Given JJ's answer on this page, Aporter's answer does fit the profile of (more extreme) right-wingers in the US which hardly make any distinctions between liberals and any kind of marxists. This is actually not terribly new in US politics

During the height of the McCarthy era (in the late 1940s and early 1950s), American senator Joseph McCarthy associated homosexuality and communism as "threats to the "American way of life." In both cases, association with sickness and disease provided means of legitimating isolation from impressionable young people."[24] Homosexuality was directly linked to security concerns, and more government employees were dismissed because of their sexual orientation than because they were left-winged or communist politically. George Chauncey noted that, "The specter of the invisible homosexual, like that of the invisible communist, haunted Cold War America," and homosexuality (and homosexuals) were constantly referred to not only as a disease, but also as an invasion, like the perceived danger of communism.[25]

McCarthy often used accusations of homosexuality as a smear tactic in his anti-communist crusade, often combining the Second Red Scare with the lavender scare. On one occasion, he went so far as to announce to reporters, "If you want to be against McCarthy, boys, you've got to be either a Communist or a cocksucker."[26] Some historians have argued that, in linking communism and homosexuality and psychological imbalance, McCarthy was employing guilt-by-association if evidence for communist activity was lacking.[27]

But by then, the Soviets were not actually that liberal:

Relative Soviet tolerance for homosexuality and homosexual rights ended in the late 1920s — as Soviet society came increasingly under Stalinist control. In the 1930s, along with increased repression of political dissidents and non-Russian nationalities under Stalin, LGBT themes faced official government censorship, and a uniformly harsher policy across the entire Soviet Union. Homosexuality was officially labelled a disease.[72] [...]

In 1934 the Soviet government recriminalised homosexuality in the Soviet Union. On March 7, 1934, Article 121 was added to the criminal code, throughout the entire Soviet Union, expressly prohibited only male same-sex sexual intercourse, with up to five years of hard labor in prison. There were no criminal statutes regarding lesbianism. During the Soviet period, Western observers believed that between 800 and 1,000 men were imprisoned each year under Article 121.[73]

Some historians have noted that it was during this time that Soviet propaganda began to depict homosexuality as a sign of fascism [...]

That we delete McCarthyist answers nowadays here... is perhaps a good thing, although frankly heavily downvoting them might be enough when they don't misrepresent sources but just honestly express the poster's opinion. (I mean that if Aporter had honestly cited, or better, actually quoted McCarthy or any of the right-wing authors that might still share that view today, it would have been an honest answer, despite still being heavily biased by omission of other relevant facts.)

(As a side note: this meta-post is the first time that I saw that answer of Aporter. I had not flagged it, or even downvoted it.)

Not the answer you're looking for? Browse other questions tagged discussion support deleted-answers specific-answer .

3
How to flag answers that misrepresent sources they cite?