Question(s) about homicide rate in Somalia

It seems we get those once in a while, probably from the same person who might troll with other topics, but I don't see a horrible reason why the Somalia-homicide-rate question itself needs to go. It would probably be better if a mod managed to find the instance that was actually answered (I vaguely recall there was one answered), undeleted that one, so we could just close these new ones as duplicates. Perhaps having a "canonical answer" for that question might stop its reappearance.

I can only find two instances of this question on Politics Stack Exchange:

A comment on the first instance claims that the author asked the same question on other SE sites. But I can not verify that because the only link they posted 404s (for me - maybe it's a deleted question I can not view due to insufficient reputation on Skeptics.SE).

Both questions are closed and got lots of downvotes. The first one was deleted through delete-votes from the community. The second one also got 2 delete votes already, and some people wanted to accelerate the deletion by flagging it as "rude or abusive" (which I declined, by the way - the question might not be a good one, but that doesn't make it "rude or abusive"). Update: Now it's also deleted through community votes.

It appears to me that the community clearly does not consider this a useful on-topic question for this site, so I see no reason to undelete either of them.

I voted the post as Rude/Abusive because, in addition to the Somalia question that has popped up at least five times that I know of between Skeptics and Politics, it also came from a user with a bog-standard Fascism troll question.

If the community decides that a post is from the holocaust/fascism troll, I really wish the user would get blown away instead of leaving them to wander around and post stuff like this.

https://politics.stackexchange.com/users/30458/jay is the user named Jay that posted the fascism question previous. They were delted.

https://politics.stackexchange.com/users/30667/jay is the user named Jay that showed up after the previous Jay's deletion, just a week later, by an astounding coincidence, and started posting one of the three brands of repeat troll subject questions on their first day.

I don't think a canonical answer would be useful.

On its face, the homicide rate of Somalia is not a question about politics, but a trivial question about statistics, so it should be closed as off-topic.

OP is likely trying to make a political point, but that's not what questions are for.

Because of the persistent troll effort around this issue, I also don't think that it's unreasonable to flag such questions for moderator attention.

Here's the "question" on Skeptics.SE: 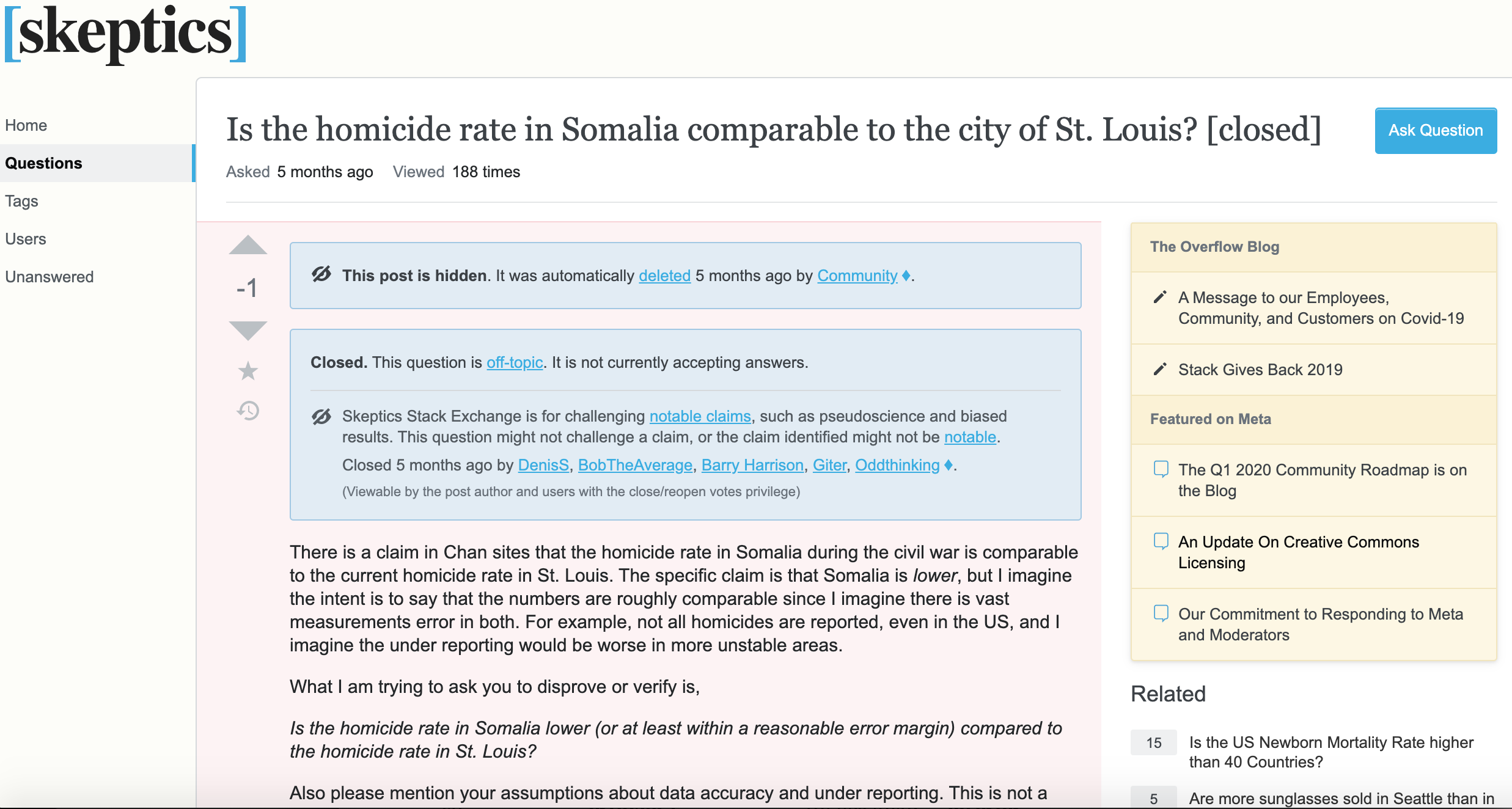 Note that this was closevoted by four individuals.

According to this comment by F1Krazy, "OP has been suspended for a year for "rule violations" (couldn't tell you what those were) so we'll be waiting a while.". The user (user50236) indeed has since been destroyed/deleted/whatever.

Comparing the homicide rate in the US with third-world countries (especially non-white ones) was popular with Trump a while ago, and questions that aren't genuinely asking a question but instead are trying provoke an emotional reaction should be deleted. (Oh, and I just noticed while looking at the screenshot that it refers to the chan sites, yay).

Should we be providing a canonical answer? Well, firstly, I'd like fringe claims to be handled in Skeptics.SE rather than politics.SE. Secondly, websites with statistics on homicide are fairly common - any questions would likely be so googleable that our own answer would be redundant. Thirdly, I don't want sockpuppets of banned users to be able to keep their posts on SE, let alone going to the effort of creating a canonical question for them.

Not the answer you're looking for? Browse other questions tagged discussion deleted-questions .