@Philipp moderator seems to be into showing his attitude a bit too much. Am I missing something?

I am not a contentious type of person. Maybe I'm missing something. But here are two examples.

1) I asked this question, but it appeared to some users as too broad. Since this concept of "broadness" is quite obscure to me (it didn't look to me as overly broad), I offered three options for potential responders. @Philipp picked one of those options, the most basic, edited out a significant part of my question, and reopened it (it had been closed). I didn't like the edit and told so. @Philipp just flipped out and closed it again. I said nothing. I'm sure a lot of people would find my question interesting too. 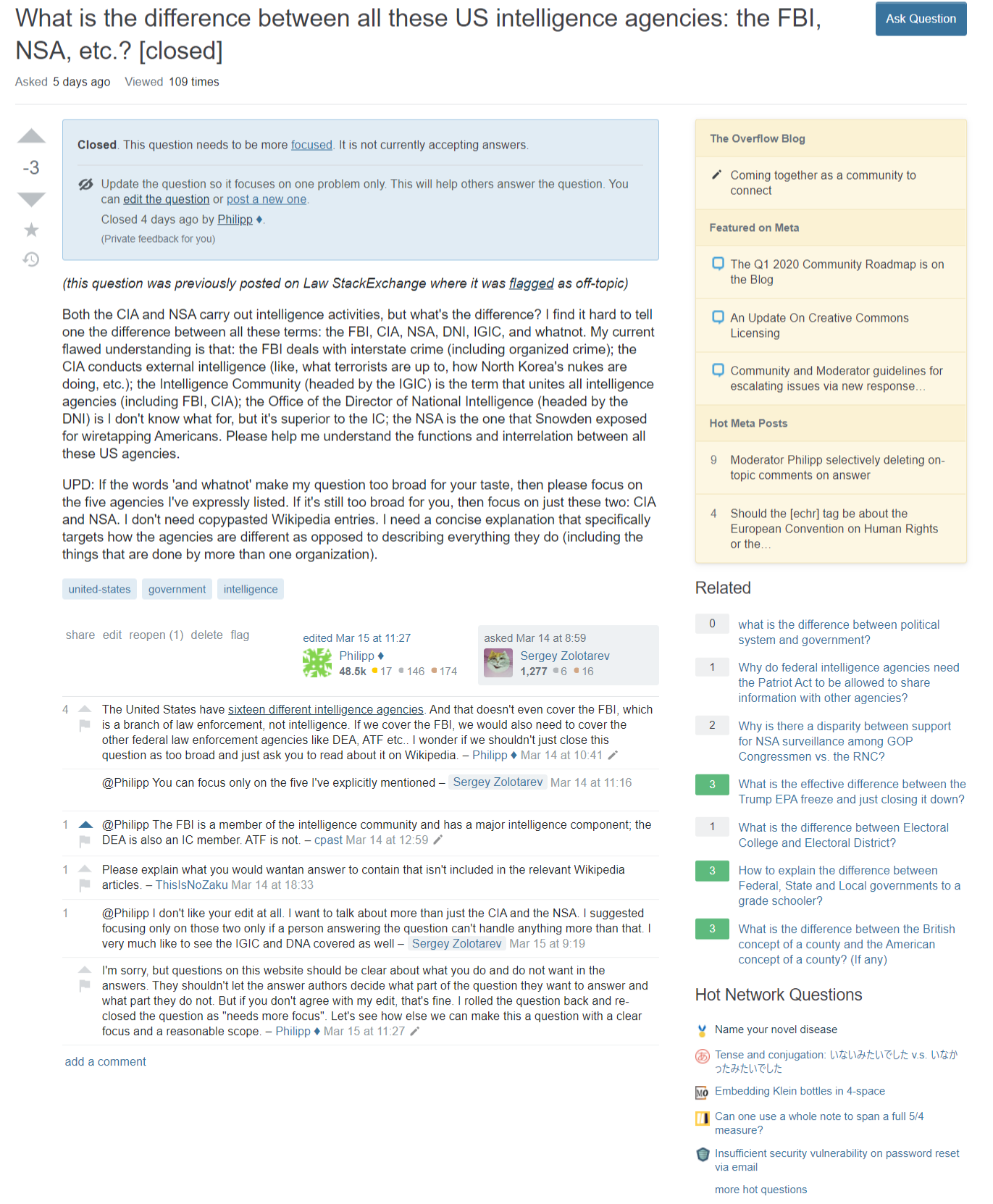 2) Just recently, he (or she) dropped an A-bomb in the comment section to this question. He said comment sections are not a place for debates. To me, it sounds horribly similar to the infamous quote attributed to one of our crooks who said, "A parliament is not a place for discussions", or something to that effect (including the Russian parliament). But okay, I'm ready to accept it, maybe it's in your rules or something (which doesn't change the fact that it's, in my opinion, slightly odd). But earlier, on other SE sites, people would just move comments to the chat if such an issue arose, not just obliterate everything (example, see Alec's answer). I'm used to calling @Philipp's type of behavior "being a dick" (as a relatively neutral, matter-of-fact description, albeit slightly informal) so I told @Philipp just that. 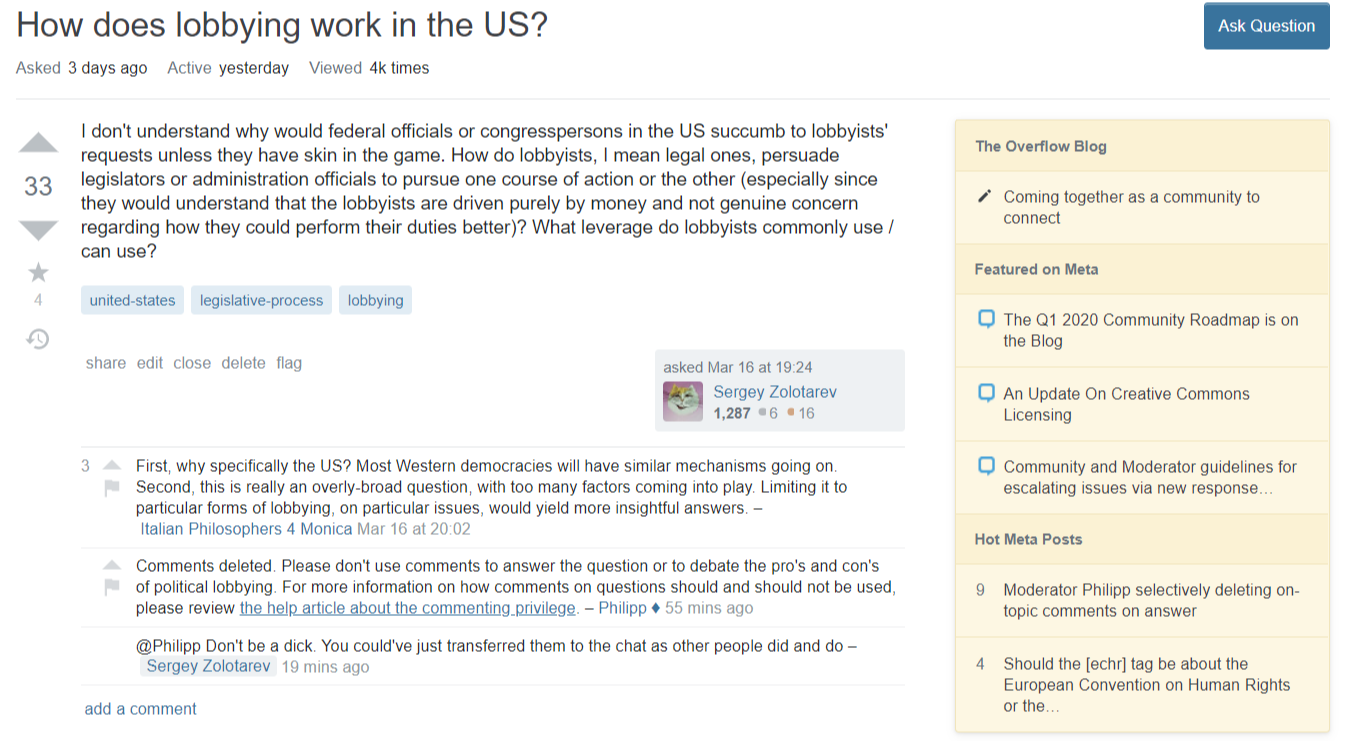 Am I misunderstanding something or there's really something unusual, if not inappropriate, about the behavior of @Philipp? Is it par for the course here?

1) I would tend to agree with you that the question was fine, but so were Philipps actions.

The community obviously disagreed about the question being fine, 5 members closed the question and it was heavily downvoted.

Philipp tried to help by improving the question and using his mod-powers to reopen the edited question.

You didn't want that help and rolled back the edit, so the question was returned to its previous, community-designated status as well (closed), with an offer for you to improve the question yourself.

2) Comments are indeed not a place for debate and can be deleted easily.

You may not like it (and I feel that sometimes comments are deleted a little to easy, and sometimes they remain even though they devolve into needless arguments; it's a fine line to walk for mods), but that's how it is at stachexchange.

3) Your comment was in violation of the Code of Conduct:

No name-calling or personal attacks. Focus on the content, not the person. This includes terms that feel personal even when they're applied to content (e.g. “lazy”).

Consequences are generally a warning for first-time offenses and suspensions for repeat offenders.

That is correct. If you want to debate, go to reddit or a forum. The StackExchange sites (of which this is one) are descended from StackOverflow and share that site's goal to be a repository of specific and objective (as much as possible) questions and answers, not a place to discuss, debate, or hang out (the meta sites like this one being the exceptions). As a moderator, it's Philipp's job to keep this site focused on this goal as much as possible and, in my opinion, they do a great job keeping this site from descending into total chaos.

If you want to answer a question, do it in an answer, not a comment. If you just want to chat or debate something, join a chat room or create one of your own. But if you put it in a comment you should expect it to be deleted either by a mod or by regular users.

Not the answer you're looking for? Browse other questions tagged discussion moderation moderators .

10
How do we deal with politically divisive news events?
7
How on topic is the military?
12
Recommendations for Yes/No questions that can only be definitively answered for one outcome?
4
How to deal with multiculturalism and different cultural sensitivities?
12
Moderator Philipp selectively deleting on-topic comments on answer