How can we handle questions that are dynamic and change over time?

Some questions are asked about concrete situation at a moment of time. For example What has trump accomplished in his first term?.

As long as situation changes, answers may fade out.

Maybe such "dynamic" questions should be handled some other way?

It worth noting that there's a post notice for these very questions:

Only ♦ moderators can apply and remove these notices.

There are currently two questions on Politics Stack Exchange which have this notice:

You can find these with a SEDE query.

I would suggest placing a bounty on the question with outdated answers. There is even an option for this on the bounty dialog: 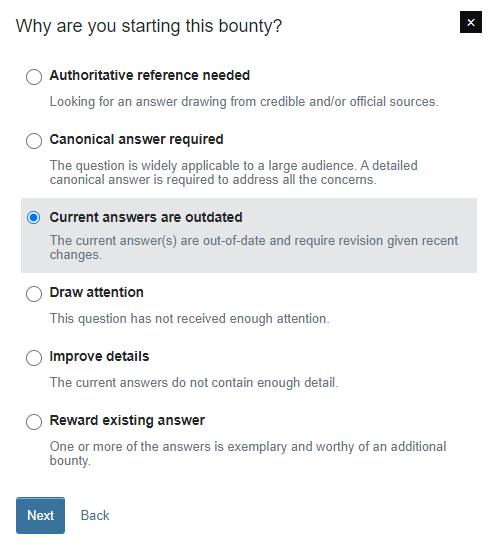 I would also point out that the only answer to the new question at the time of writing is just an updated version of the user's older answer to the proposed duplicate, which seems to reinforce the appropriateness of placing a bounty to encourage answers to be updated.

Not the answer you're looking for? Browse other questions tagged discussion scope questions .

6
Are public officials' or politicians' reactions to current events off topic?

5
How should we handle offensive images in questions, or obvious soapboxing?
13
Recommendations for Yes/No questions that can only be definitively answered for one outcome?
16
How to handle 'arguments from authority'
7
How to handle short low-quality answers which are prevented from deletion by upvotes?
14
conflict between 'good answer' and 'popular answer'
1
Is asking if any given statement of a politician constitutes propaganda on-topic here?
9
How early is too early to answer a question evaluating a person or policy?