I suggested an edit to the only answer to my question Is there any good evidence for institutional racisms in the United States?.

The edit got rejected by user "JJ for transparency and Monica" and user "Martin Schröder".

This reason was given: "This edit deviates from the original intent of the post."

However as you can see below, this is entirely unjustified. This is what I added:

Using rich data linking federal cases from arrest through to sentencing, we find that initial case and defendant characteristics, including arrest offense and criminal history, can explain most of the large raw racial disparity in federal sentences, but significant gaps remain. Across the distribution, blacks receive sentences that are almost 10 percent longer than those of comparable whites arrested for the same crimes. Most of this disparity can be explained by prosecutors’ initial charging decisions, particularly the filing of charges carrying mandatory minimum sentences. Ceteris paribus, the odds of black arrestees facing such a charge are 1.75 times higher than those of white arrestees.

However they also note that:

Finally, these disparity estimates do not include structural inequality.For example, they do not include the racial disparity in sentences dueto black arrestees being more likely to live in federal districts that givehigher sentences or be arrested for crimes that are associated with longersentences. Both could exist for numerous reasons unrelated to race. How-ever, it is also possible that the racial makeup of arrestees directly affectshow punitive the justice system is in particular districts or the relative stat-utory penalties for offenses. Likewise, the choice to weigh criminal historyheavily in the guidelines sentencing scheme, while grounded in a varietyof policy considerations, has a substantial disparate impact on black de-fendants."

It is also stunning that these two moderators are entirely fine with the following already existing part of the answer:

Some may just be playing the victim card, but when nearly all ethnic minorities (of all origins, really) report some degrees of racial injustice or bias in their life, then there's probably some truth to it. Even if 90 % of those questioned are just playing the victim card (unlikely but let's make that assumption)... that means 10 % aren't. That's evidence.

Perhaps the rejection reason isn't 100% accurate, but it looks like you're trying to post a new answer. You can't, since the question is closed, but that is no reason to edit an existing answer and trying to put your words in the author's mouth.

When you edit a post, there's this widget which says "clarify meaning without changing it". 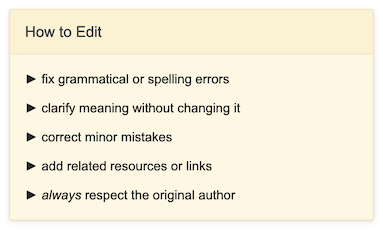 That would be a reason to downvote the answer, but not to edit it; again, that would change the answer too much.

You proposed a huge edit to a question that's (at least for me) essentially a separate answer.

Not the answer you're looking for? Browse other questions tagged discussion questions moderation opinionated .

The Overflow Blog
Featured on Meta

2
Is it appropriate to comment on the source of a claim in an answer?
3
Criteria for approving an edit on Politics SE
16
Can we devise a canonical question about US federal law vs State law?
0
Was the act of deletion for a unlikely Racist slur itself also an act of unintentional racism?
5
Does this answer contain a “subtle put down”?
3
Is question about why certain laws are enforced should be in law or politic?
12
Keeping this tag is an in[justice]