What is the Sandbox?

This "Sandbox" is a place where Politics users can get feedback on prospective questions they wish to post to the main page. This is useful because writing a clear and fully specified question on your first try can be difficult, and there is a much better chance of your question being well received if you post it in the Sandbox first.

To post to the Sandbox, scroll to the bottom of this page and click "Answer This Question", or click on the "Add Proposal" link below. Click "OK" when it asks if you really want to add another answer. Write your question exactly as you would when actually posting it. You may also add some notes about specific things you would like to clarify before posting it. Other users will help you improve your proposed question by rating and discussing it. When you think your question is ready for the public, go ahead and post it, and replace the post here with a link to the question on the main site and delete the Sandbox post.

To add an inline tag to a proposal use shortcut link syntax with a prefix: [tag:united-states]

The Sandbox works best if you sort posts by "active".

Voting on answers indicates wether or not you think they are ready for the main site in their current form. 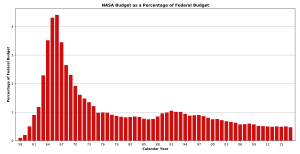 A look at this graph, especially in times of the "Billionaire Space Race", is an interesting political topic. I am aware that there has been a gradual shift of the importance from NASA to the big 3 as the frontrunner of Space exploration.

[by gradual shift I refer to reduction in federal funding of NASA simultaneously with the approval of Tax breaks for the Big 3 for the purpose of sending mankind once again to space, but this time 'private' (article ironically written by Bloomberg org, I guess someone is feeling left out lol)]

Coming back to the topic of federal funding, after poking fun at the billionaires club, I am also aware that there is a general trend of reduction in NASA funding after the peak of the "space race" during cold war as well a trend for tax breaks for Big 3 during the peak of the "Billionairre space race" and trend begun by

Adil MohammedAdil Mohammed
15022 bronze badges
New contributor
Adil Mohammed is a new contributor to this site. Take care in asking for clarification, commenting, and answering. Check out our Code of Conduct.
1
Add a comment  |
-1

What countries cannot require vaccination for their citizens

In accordance with a countries base laws (e.g. the constitution for the US), what countries cannot (while following these laws) mandate vaccination for all of their citizens?

Edit: this proposal has been abandoned by me in favor of doing what Philipp suggested in the comments and posting one question for each specific country.

Note: by the two major political parties I am referring to republicans and democrats.

It seems (to me) that people in the Democratic Party often lean towards censoring things on social media. For example, AOC said

We’re going to have to figure out how we rein in our media environment so you can’t just spew disinformation and misinformation (quoted from this article).

Now, AOC does not represent the views of every member off the party, and this is just an example.

It also seems (to me) that the Republican Party often leans toward not censoring what gets posted on social media (I couldn’t find a quote from a Republican on this).

I would like to know wether this is true or not.

My question is: Which political party has more people leaning towards censoring messages on social media?

Not the answer you're looking for? Browse other questions tagged discussion sandbox .

7
United States tag synonym with USA?
4
What should our predefined off-topic reasons be?
7
Should we suggest/demand that people explain technical terms in their questions?
51
Please stop it with the serial downvoting
10
Downvoting for disagreement
2
Why can't I edit this question?
14
What custom close reasons should we have?
3
Fairly upvoted question that is mostly a conspiracy theory