What's the difference between 'opinion based' and speculative analysis?

This question, currently closed for being 'opinion' based, is up for a re-open vote.

To my mind, 'opinion-based' means that any answer to the question must be subjective in nature.

This question, however, isn't asking for subjective answers - it's asking for answers that describe objectively observed phenomena. There may be a lack of empirical evidence or data to answer the question but insofar as political science, as a discipline, is on-topic here it seems to stand to reason that theory-informed answers are not reasonably considered 'opinion.'

Is there an established community standard for what 'opinion' is vs. 'theory?' Am I misunderstanding the purpose of PSE and theory-informed political science is actually off-topic here?

Is there an established community standard for what 'opinion' is vs. 'theory?'

No, even whether a question is primarily opinion-based (POB) can be subjective. Of course, in some cases a question may be very clearly opinion-based. In the question that you cite, I think you can make both arguments. Let's do that to see what might drive close-voters and voters to reopen.

The question body ends with the following question:

Why is Biden's approval so polarized while certain people are able to escape polarization at least partly, even at the federal level?

One the one hand, you could say that it's opinion-based because it's hard to answer based on knowledge that's commonly available. To answer the question probably requires original research. Another view might be that while it's okay to ask for specific polling results, some polling research might be inherently flawed because of the way the research might be conducted. See for example Yes Prime Minister's bit on leading questions in polling.

On the other hand, you could say that the popularity of the US president is such a big subject that there is enough research available to answer the question without original research. And while some studies may be flawed, there could be more studies on the same subject which may confirm of dispute the findings of other studies.

Whether the reasoning toward closing as POB prevails over the reasoning to keep a question depends very much on the question itself. For now, we let our users decide. There are some limitations on closing and reopening, I think a user with the privilege can vote to close once and vote to reopen once (not sure about the exact rules), so it will settle somewhere eventually.

If you think a closed question should be reopened or an open question should be closed then the easiest thing to do is to vote for that action. Additionally, if you think it's not clear why your action is the right one then it's helpful to add a comment under the question explaining the reason for your action. If that doesn't work you could start a discussion about the specific question here on meta. Of course starting a whole meta discussion for a single question is quite a lot of work, but it's possible if you feel strongly about it.

Unfortunately, it's very hard to rule on the general case of POB (i.e. this meta question) because the circumstances vary from question to question.

For what's that worth, I didn't vote to close, but I've down-voted the question due to the poorly presented motivation:

Biden is a highly polarizing figure despite some of his efforts not to be. Obama for example had a far more volatile approval, but he was the last president to have such an elastic approval rating. It is approve by 9 on 538, which past approval vs election correlations show is very similar to Biden's margin in the popular vote.

Supposedly there's some real motivation in there, and it might be a legitimate question, but I can't make heads or tails out of it... Someone linked in a comment to Gallup which paints this picture: 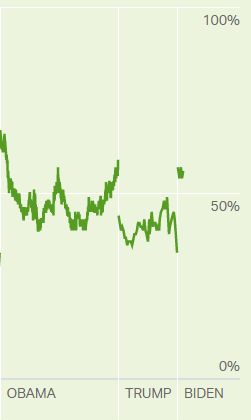 Presumably the question might be why Biden is less popular than Obama was at the beginning of his term... or something like that, in which case it should be rephrased, clarified.

Also note that the accepted answer starts with "This is my opinion." So that may have contributed to the close-votes.

As written, it's unclear (to me) if the question can be answered with facts...

Speculative analysis is informed opinion: opinion based in solid theory, with a certain amount of direct or tangential evidence that bears on it, and with an openness to outcomes according to reason. I'm fond of speculative analysis, which I think is the only place where we can come to understanding and consensus; I don't have much use for mere opinion.

I saw your question when it was originally posted, and I decided not to give an answer because I couldn't find the right ground for speculative analysis. Public opinion isn't rational or analytical, and I've seen good arguments that it isn't even really relevant to the performance of political leaders. I could obviously have laid out a few of the conditioning factors — notably the nationalistic turn of the far Right, and the increasing use of partisan propaganda in US society — but that would hardly answer the question in an informed and sophisticated manner. There wasn't much I could do with this that wouldn't reduce to 'mere' opinion.

Not the answer you're looking for? Browse other questions tagged discussion questions opinionated .

13
How does "Primarily Opinion-Based" work on this site?
4
How do you determine a “primarily opinion based” question

7
Striving for the highest quality
4
"Primarily Opinion-Based" because evidence might not exist?
2
What is the difference between [president] and [presidential]?
2
How to avoid primarily opinion-based holds?
2
Is "opinion-based" the same as "subjective"?
3
Are there double standards for pushy questions, exemplified by two recent ones on nuke power?
14
conflict between 'good answer' and 'popular answer'
6
Better defining the [polling] and [public-opinion] tags